Toyota announced Wednesday that it plans to make hydrogen fuel-cell modules in the U.S., starting in 2023. The fuel-cell stacks, in modular form, will be part of a kit that will essentially replace a traditional heavy-duty diesel engine in big Class 8 semi trucks. The system is capable of delivering up to 160 kw (214 hp) of continuous power. This is the first time such a fuel-cell setup has been built by Toyota outside of Japan. 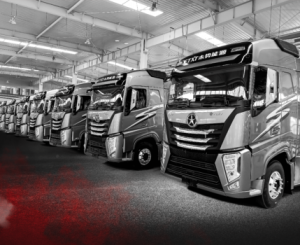 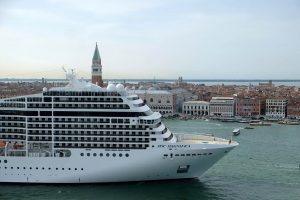 Air Products (NYSE:APD), a world leader in the supply and transport of hydrogen, and Cummins Inc., a global power and hydrogen technologies leader, jointly announce the signing of a memorandum of understanding (MOU) to work together to accelerate the integration of hydrogen fuel cell trucks in the Americas, Europe and Asia. Cummins will provide hydrogen fuel cell electric powertrains integrated into selected OEM partners’ heavy-duty trucks for Air Products, as Air Products begins the process of converting its global fleet of distribution vehicles to hydrogen fuel cell vehicles.

Hyundai motor, following up on 1 million kilometer driving with 46 trucks in Switzerland, will deploy XCIENT fuel cell trucks for regional use in California. Glovis America will be the fleet operator of the trucks. The trucks have a maximum driving range of 500 miles.

The Role of Hydrogen in Transportation

This McKinsey and Company Insight examines the role of hydrogen primarily in transportation, it outlines hydrogen potential market share, as well as a commercialization adoption timeline. 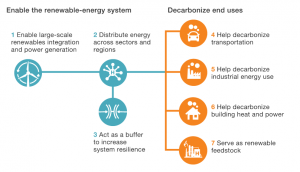 “Hydrogen is a versatile energy carrier and can be produced with a low carbon footprint. It can play seven major roles in the energy transformation, which span from the backbone of the energy system to the decarbonization of end-use applications.”

“As described, hydrogen has a wide range of applications in the energy system (Exhibit 2), with its role for the decarbonization of the transportation sector among the most prominent ones.”

A Bus That Emits Only Water? You better believe it!

“Not only are fuel cells considered safer than gasoline-powered vehicles, they are also 2x-3x more efficient! The fuel cell is able to use 40%-60% of the energy from the fuel, the hydrogen, to power the vehicle. To put that into perspective, a typical gasoline engine is less than 20% efficient at doing the same thing. This efficiency means that the fuel cell can reduce the need for about 9,000 gallons of fuel over the lifetime of the vehicle and that the carbon released into the atmosphere would decrease by 100 tons per vehicle.” 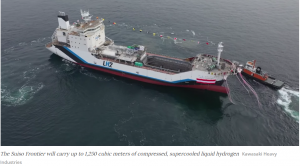 A pilot program is kicking off thanks to a partnership between Kawasaki Heavy Industries, Iwatani Corporation, Shell Japan and J-Power, and last week, Kawasaki delivered on its part of the deal by launching a brand new ship designed to carry liquid hydrogen between the south coast of Australia and an unloading terminal under construction in Kobe, Japan.

It’s all about hydrogen cars and fuel cell technology. Fuel cells work like batteries, but they do not run down or need recharging.

Japan Is betting big on the future Of hydrogen cars. Hydrogen is not only the most common element in the universe but also the most common element here on Earth. Yet the limited availability of pure hydrogen in gaseous form has held back hydrogen fuel cells for decades. Out in the cosmos, stars are mostly made of hydrogen. Here at home, our hydrogen is mostly bonded with oxygen to make water. To get hydrogen to use in a fuel cell to make electricity, you have to either break down a water molecule or break down a complex hydrocarbon like natural gas. When you break the natural gas molecule, you get hydrogen — but you also get carbon dioxide, which leads to global warming. Plus, you’re using a non-renewable resource.

That leaves the water, which is a great source except that you have to put more energy into breaking the molecule than you’ll get back out when you use the hydrogen to generate electricity. The solution that makes hydrogen a workable fuel is this: using renewable energy to create enough excess electricity that you can break down the water and store that energy in the form of hydrogen. It’s not as elegant as it could be, but it’s pretty good if you consider what had to happen to store solar energy in the form of oil, coal, and natural gas. hydrogen still has niches where its main strengths – lightness and quick refueling – give it a clear advantage. While you can fit your personal driving lifestyle around strategic battery charging stops, this is not ideal for a commercial vehicle that needs to run for very long periods and distances with only short waits to refuel. The weight of batteries for eight hours of continual usage would also be prohibitive in a train, for example.

So, for industrial vehicles, hydrogen seems like a viable option, despite the inefficiency. But for personal car users, it’s no contest. Hydrogen evangelists are still arguing that FCVs are the future of personal transport and the technology would take off in 2020. It’s likely that FCV energy supply-chain efficiency will be improved over time and more renewable energy sources used in hydrogen production.

Hydrogen Versus Battery in Vehicles Continues to Evolve – Who is the Winner?

We will not know for decades to come. We do know that the various vehicle segments – passenger cars, buses, local trucks, long distance trucks, forklifts – have very different requirements. Historically these segments have used different fuels due to these requirements, primarily gasoline, diesel and propane. 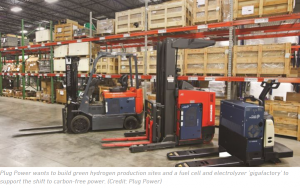 For instance Walmart has more than 10,000 hydrogen fuel cell forklifts. Fork lifts and pallet lifts are critical to the efficient running of distribution centers. So much so that Walmart and Amazon invested in fuel cell manufacturer Plug Power who has a deep presence in supply fuel cells for this vehicle segment.

Why hydrogen fuel cells? They cleanly convert hydrogen with only water as a tail pipe emission. Enclosed distribution centers run hundreds of these vehicles constantly. Unburned hydrogens from the previous fuel of choice – propane,

degraded air quality. Lead acid and newer Lithium battery fork lifts address the air quality concerns.  They have a major drawback in 24-7 operations such as Walmart and Amazon distribution centers – charging. This takes the fork lift out of service, requiring extra forklifts, floor space to recharge, and often dedicated personnel to optimize charging.  Hydrogen fork lifts can be refueled by their operators, in minutes much like refueling your car.