NASHVILLE, Tenn. — Volvo Trucks is ramping up sales and deliveries of battery-electric trucks while also reducing carbon emissions within its own facilities and supply chain in North America as part of its global efforts to improve environmental sustainability.

“If we want to do something about climate change, we need to do it now,” Voorhoeve said. Globally, Volvo Trucks has set a target of 2050 to achieve a completely fossil-free rolling fleet. To get there, the company intends to offer a fossil-free vehicle lineup by 2040 and a 50% reduction in carbon dioxide emissions by 2030 as intermediate steps.

But the truck maker is also addressing its own carbon footprint.

By the end of this year, the factory also will begin receiving parts and components delivered by the Volvo’s own electric trucks.

Two trucking companies that supply the New River Valley plant — Watsontown Trucking Co. and Camrett Logistics — have each placed orders for their first VNR Electric models and will use those trucks to transport inbound components to the facility. The two trucks will complete 10-12 round trips per day between local warehouses and the Volvo factory and will recharge at the fleets’ facilities. 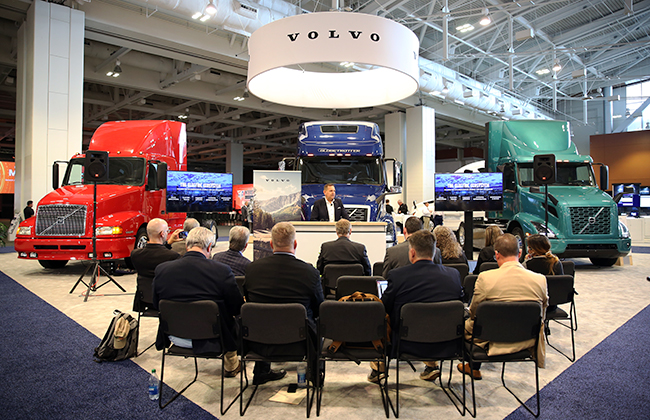 Volvo’s press conference was artistically stage in the exhibit hall with three trucks as a backdrop. (John Sommers II for Transport Topics)

Producers Dairy, a dairy processor and supplier based in Central California, has placed an order for two of the battery-electric truck models. Those zero-emission vehicles will be deployed in late 2021 on routes from the dairy company’s manufacturing facility in Fresno to regional grocery stores.

Another customer, Fleetmaster Express, is set to deploy the first VNR Electrics in Texas, Voorhoeve added. The fleet is planning to deploy 10 of the battery-electric trucks to transport aluminum packaging products from the Ball Corp. factory in the Dallas-Fort Worth area, he said.

Voorhoeve noted that the Volvo VNR Electric is now operating in a variety of regional and shorthaul applications, including hauling containers from the ports, distributing beer in New York and delivering food to stores.

“We have electric trucks from the West Coast to the East Coast, and in the middle because we have now entered Texas as well,” he said. “I’m enthusiastic about that because I strongly believe we need to hurry up and get more electric trucks on the road.”

To service those trucks, a growing number of Volvo dealerships are working toward electric-vehicle certification. Voorhoeve said he expects about 30 Volvo dealers to be EV-certified around the end of this year.

At the same time, Volvo Trucks continues to wring more fuel efficiency gains and emissions reductions out of its diesel-powered trucks.

Earlier this month, Volvo announced that its D13 Turbo Compound engine is now standard on all of its longhaul VNL models. The D13TC engine can provide up to 6% fuel economy improvements compared with the 2020 Volvo D13 VGT engine, the company said.

Volvo also marked 25 years since the introduction of its Volvo VN model in North America. The truck maker showcased an original Volvo VN truck from 1996 alongside a 25th anniversary edition VNL 760 truck in the MCE exhibit hall.