US natural gas production and consumption decreased in 2020 because of mild winter weather and the COVID-19 pandemic’s effect on demand, according to the EIA’s recently released Natural Gas Annual. 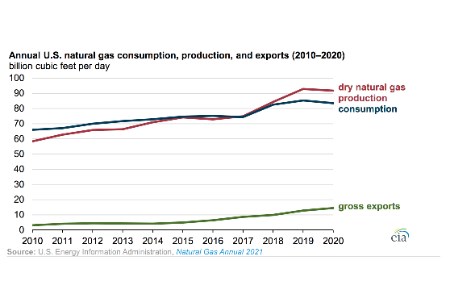 Less natural gas was consumed in the US, which pushed prices down; the annual Henry Hub spot price for 2020 averaged US$2.03 per million British thermal units (MMBtu), the lowest annual price since 1997. The low prices contributed to record-high levels of natural gas exports and consumption in the electric power sector in 2020.

Natural gas consumption in the largest US consuming sector – electric power – rose by 3% in 2020. Low prices made natural gas a more competitive fuel for generation, particularly compared with coal. Natural gas-fired generation capacity has been increasing in recent years, replacing coal-fired capacity as it retires. Natural gas accounted for 39% of all power generation in 2020, nearly equal to the shares of coal and nuclear, the next two largest sources, combined.

Natural gas consumption in three of the four major US consuming sectors decreased between 2019 and 2020, but the commercial sector decreased the most in percentage terms. The winter months of 2020 (January – March and November–December) were milder than in the previous two years, which resulted in a 7% decrease in heating demand in the residential sector and an 11% decrease in the commercial sector. Industrial sector demand decreased by 3% amid a weakening economy in 2020. The industrial and commercial sectors consumed less natural gas largely because of COVID-19-related closures and reduced usage of facilities.

Total US natural gas exports (net exports) rose by 13% in 2020, primarily because of increased pipeline exports to Mexico and record-high liquefied natural gas (LNG) exports at the beginning and end of 2020. US natural gas net exports have increased each year since 2007.

Read the article online at: https://www.worldpipelines.com/business-news/03112021/us-consumption-and-production-of-natural-gas-decreased-while-exports-grew-in-2020/