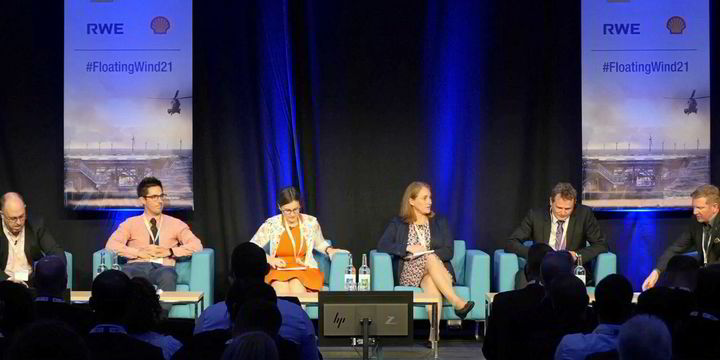 The UK should raise its 2030 floating wind target and set a new goal for up to 20GW by 2040 to keep its place at the leading edge of the fast-emerging sector and unlock a potential £44bn ($61bn) economic opportunity, senior officials from key industry players including Shell told an industry conference.

The official 1GW target for the end of this decade is now out of kilter with both the UK’s existing pipeline and the scale of ambition needed to deliver big cost reductions and supply chain benefits, the Floating Offshore Wind 2021 event underway in Scotland heard.

“Credit to the government for putting in a target for 2030 – but I think if we were to sit down today and understand what is a credible and ambitious target, it would be some way above 1GW,” said Ralph Torr, programme manager for floating wind at the UK’s Offshore Renewable Energy (ORE) Catapult.

“The 2030 target is great because it focuses minds of stakeholders on the timeliness of delivery of those early large projects, but it doesn’t provide a sense of scale.

“Putting down a marker for where the UK wants to be in 2040, somewhere around the 15-20GW mark, at least would be credible but also suitably ambitious.”

Torr pointed out that such a goal would involve around 2GW of deployment annually in the 2030s, but that may have to rise further if floating wind – as many expect – needs to play a huge role in meeting the UK’s net-zero ambitions, maybe to the tune of 50GW by 2050.

ORE Catapult and industry body RenewableUK on Wednesday put out separate reports flagging the £44bn of gross value added that an ambitious floating wind build-out could unlock by 2050, and that the UK’s floating wind pipeline already amounts to a world-leading 8.8GW.

On a panel at the Aberdeen event, Shell UK business manager Melissa Read pointed to the gap between the 1GW 2030 goal and the up to 7GW alone that could be spurred by the ScotWind leasing round currently underway in Scotland, which has attracted global heavyweights including her own company in conjunction with Iberdrola.

The 1GW target we’ve currently got is less than two years’ output from a substructure facility.

Read said large-scale visibility is crucial to both underpinning supply chain investments and driving down power costs at the rate seen in the fixed-bottom sector.

“The 1GW target we’ve currently got is less than two years’ output from a substructure facility,” Read told delegates.

“That isn’t enough to give us the anchor investments we need. We need to see that pipeline and that vision.”

Dan Finch, UK managing director for Ocean Winds, the global developer that this week confirmed 6GW of floating ambitions under ScotWind in partnership with Aker Offshore Wind, said ambitious but achievable goals are crucial to keep the supply chain humming.

“Without a consistent process – a steady chain of projects – the supply chain won’t be self-sustainable and we’ll end up with a boom and bust… and that’s frankly useless.”

RenewableUK CEO Dan McGrail said: “Many countries around the world are eyeing up the huge industrial benefits that will come from being at the forefront of developing floating offshore wind turbines.

“Floating wind is advancing so quickly that the government’s 1GW target is no longer a world-leading ambition, but a fraction of what we could develop in the UK over the next decade. We’re urging ministers to increase their current 2030 target and set a new 2040 ambition as a key step towards net zero emissions.”

The UK is currently chasing a 40GW total offshore wind goal by 2030, overwhelmingly based on fixed-foundation projects and four times what is currently in place.