Magnetic concrete that charges electric vehicles as they drive over it could be coming to an Indiana roadway in the next few years.

In a project specifically aimed at helping the trucking industry transition to electric vehicles, the Indiana Department of Transportation is partnering with Purdue University to test and develop charging technology that incorporates German company Magment’s magnetic concrete material.

The initial phase of the pilot project involves determining if this wireless, contactless EV charging system could work in Indiana. If tests suggest the concept is viable, INDOT plans to install the technology on a yet-to-be-determined highway segment that truckers use heavily. 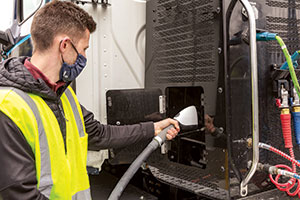 Today’s battery-electric trucks recharge by plugging in at charging stations, but some developers are testing other EV charging concepts. (Daimler Trucks North America)

This would be the first dynamic, magnetic electrified roadway in the nation and one of the only such examples in the world.

“Indiana is a major player in the freight and logistics sectors,” said Scott Manning, INDOT deputy chief of staff. “We know this affects not only companies based here but also interstate networks. We want to support heavy fleet trucks as they convert to EVs and hope this becomes viable technology for the freight industry.”

Copper coils will serve as electrical conductors embedded in the magnetic concrete. They harness the generated electricity to create a magnetic field, but the challenge for engineers is to create a field strong enough that commercial trucks can use it. A receiver, located on the vehicle’s underside, converts the charge into a form that can replenish the vehicle’s battery.

The engineers finalized the transmitter and receiver designs this fall and have begun conducting tests that simulate the power consumption of a heavy-duty truck traveling at 65 mph.

This prototype testing will help determine if the design is feasible for real-world applications. INDOT and Purdue engineers will factor in conditions such as whether the magnetic pavement can withstand the elements in Indiana during all seasons and “have the structural integrity to hold up under the load of heavy trucks,” Manning said. “We’ll have other challenges we haven’t anticipated and that we’ll learn along the way.”

Indiana’s quarter-mile electrified roadway test track could be installed on a real road in 2023 if all goes well.

Other organizations also are investigating wireless roadway charging. In September, the Michigan Department of Transportation issued its own request for proposals for what it called the nation’s first wireless, inductive roadway to charge EVs. 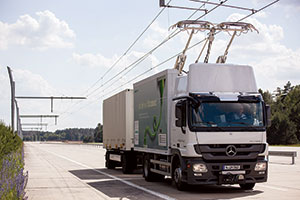 MDOT will provide $1.9 million for a contractor to develop at least one mile of charged road.

The Michigan project is not specifically aimed at trucking. The charging mode also could differ from Indiana’s magnetic concrete pilot. The RFP indicates the embedded system could be dynamic or a hybrid dynamic and static charging system.

Some transportation experts consider static wireless charging — in which a vehicle remains stationary while wirelessly charging over an electrified roadway — a more viable option than dynamic systems. Less infrastructure is required if vehicles remain stationary instead of the many feet or miles necessary to charge moving vehicles.

A working group on electric vehicle charging within American Trucking Associations’ Technology & Maintenance Council examined a variety of technologies for charging trucks. Induction was not seriously considered because of the complexities and cost of getting such a system set up over long distances, which would be necessary for it to make an impact on longhaul trucking, said Jack Legler, TMC’s technical director.

Legler said the dynamic inductive charging appears to work on a demonstration level, but scaling it is a different story. Thus, at least for the time being, it might be better suited for shorter transportation routes.

“Can you do induction? Absolutely. Can you afford it? I don’t know,” he said. “It tends to lend itself to places where you have repetitive, controllable routes, such as a city transit situation where you’ve got a dedicated bus lane … or a closed airport transit loop.”

But dynamic charging systems are not necessarily designed to provide a full battery charge. Instead, they’re considered useful for giving a boost to ensure an EV reaches its destination where it can fully charge.

“Truck drivers are not going to want to stop every four hours to recharge. This is a way to overcome that,” said Dan Haake, senior transportation planner at engineering firm HDR and chair of the Transportation Research Board’s trucking industry research committee.

Dynamic inductive charging would have less cumbersome street-level infrastructure than some other truck electrification concepts, such as catenary systems where the vehicle connects to overhead lines.

Companies such as Siemens are working on catenary electrification for road freight transportation. This concept most commonly is used for electric buses, as seen in San Francisco, but many question its practicality for trucking. A 2020 report from research firm McKinsey identified five potential e-truck charging options, excluding dynamic inductive charging, and concluded that options such as catenary systems “will remain niche applications or are commercially impractical.”

“Current charging technology seems to work for trucks that return to base every night — like your Amazon vans and regional drivers,” HDR’s Haake said. “But for the longhaul, large-sized trailer trucks, the technology is still emerging.”

For Indiana’s electric roadway to become a reality, project partners will need to hash out long-term operational and financial details, INDOT’s Manning said. For instance, they must determine who performs road maintenance and how to pay for the electricity consumed.

In addition, EV experts emphasized the importance of engaging utilities that might need to increase their generating capacity to meet increased demand.

“There’s definitely an investment that’s going to be needed both on the transportation side and the power utility side,” HDR’s Haake said. “A lot of utility coordination is going to have to take place along the corridor, because you’re going to span several utilities’ territories.”

The power supply investments that are needed to support widespread vehicle electrification in the coming years are significant.

“You have to take into account that everybody else is electrifying over the next 40 years, too, and they’re competing for the same amount of power … that we need to power our trucks,” TMC’s Legler said.

Legler stressed that charging infrastructure developers also should be having conversations with the trucking industry to ensure innovations are feasible and would be used.

Haake said dynamic charging potentially could “spread the demand for power across the system instead of just certain points,” such as truck stops or charging hubs.

“The work that INDOT and Purdue are doing is leading the way in the conversation,” Haake said. “It’s an innovative technology that has the potential to fundamentally change how we approach electric trucks. … This takes Indiana and the market forward.”

Share on linkedin
Share on twitter
Share on email
PrevPreviousAs Mobile Networks and 5G are Rapidly Implemented, Limiting Energy Use Remains a Focus
Next7 steps to optimise your pipeline trencher teeth setup for rockNext