Trucks in Germany could soon be running on fuel that’s made partly from manure at one of Europe’s biggest oil refineries.

Royal Dutch Shell Plc is aiming to produce liquefied natural gas with a bio-component for use in heavy vehicles within about two years. Trucks using the fuel can travel for 1,500 kilometers without refilling, according to Shell, which will make the new product at Rheinland, the biggest oil-processing complex in Germany.

Shell’s move is among initiatives aimed at cutting carbon emissions at the Rheinland site, which includes the Godorf plant where the “carbon-neutral” LNG will be made. Its sister facility, Wesseling, was the first European refinery to start production of green hydrogen last year, albeit on a small scale. Shell plans to stop processing crude at Wesseling from 2025.

“LNG has one of the most energy-intensive processes across the oil and gas sector,” said Seyhan Turan, director of Altass Consulting, whose clients include the European Commission and the Department of Business, Energy and Industrial Strategy. “Biomethane LNG is perfect for heavy-duty vehicles and maritime transport.” 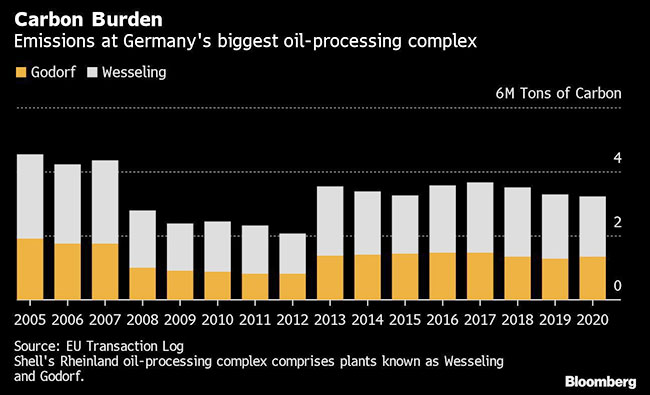 Biomethane can we made from food waste or other organic matter. Shell said it will use manure that would otherwise release methane if left to rot in the farmyard.

Shell’s idea is to mix it with fuel made from natural gas, resulting in a carbon-neutral product. The company is now looking at either buying or building biomethane plants, it said. Chevron Corp. announced plans to build similar plants with a partner earlier this year.

The process of making biomethane will also usually yield carbon which could be sold to industrial clients, according to Turan. Shell didn’t reply to an email asking whether that’s the case.