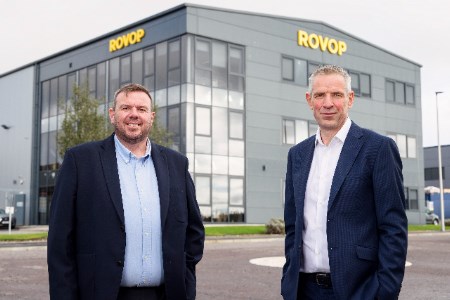 ROVOP, a leading independent remotely operated vehicle (ROV) specialist, is on a strong growth trajectory after securing contracts valued at £25 million in the last six months.

The Aberdeen headquartered global business, which is marking its tenth anniversary this year, has won a diverse spread of work across offshore energy sectors in Europe, Middle East, Asia Pacific and the Americas.

The contract wins, along with a financial restructure in 2020, have placed ROVOP in robust financial health with positive cash flow and available working capital to invest in its people, services and its fleet to meet future demand.

ROVOP has also renewed existing contracts in the offshore wind sector after investing in its fleet with the addition of two Schilling HD work-class ROVs. Both of which will be deployed on a Scottish wind farm for EDT Offshore.

Chief Executive at ROVOP, Neil Potter, said: “Despite the unprecedented challenges of the last 18 months, ROVOP has performed exceptionally well. This is testament to the dedication, hard work and loyalty of our people, who have been operating under the most difficult conditions we have ever faced as a result of the pandemic. The quality of service they provide along with the cutting-edge ROVs in our fleet have enabled us to secure new work and win renewals to existing contracts.

“Having started out ten years ago focusing on the offshore wind sector and then diversifying into oil and gas, it is fitting that, as we celebrate this milestone of a decade in business, we are reporting major new contracts in renewables. We now have a healthy spread of contracts in offshore energy sectors and geographic locations around the world performing seabed surveys, UXO identification, boulder clearance, construction and cable installation support and IRM.

Mr Potter said that, while it’s widely acknowledged that companies operating in oil and gas can transfer their skills into offshore wind and vice versa, it’s not always as straight-forward as it appears.

“There are some fundamental differences between the sectors. But with our experience and track-record in renewables, we understand these and know how to adapt our service and technology for each. Oil and gas remain very important to us and crucial to meeting global demand for energy as we transition to cleaner, greener sources. But we are equally well-positioned to capitalise on the huge opportunities for growth in offshore wind, particularly in the US, where our proven capability in supporting windfarm developments in the North Sea and across the globe present a compelling proposition for developers.”

ROVOP, which employs 200 people offshore and onshore from bases in Aberdeen and Houston, and additional offices in Dubai, the Netherlands and Singapore, is known for being one of the truly international, dedicated providers of underwater vehicles with a market-leading fleet that uses the latest technologies.

Read the article online at: https://www.worldpipelines.com/business-news/29102021/rovop-marks-anniversary-with-25-million-in-contract-wins/