Rivian, which is launching its battery-electric pickups and SUVs, is opening its first retail center or “hub” in the beachside community of Venice in Southern California, describing it as a “physical space where people can gather and connect.”

The Venice Hub is in an old electrical-works building with a Rivian vehicle or two on site and staff on hand to answer questions.

It also includes a community garden, play space for children, space for workshops or classes and a library, making it different from other automotive retail spaces, according to the fledgling automaker, which began shipping vehicles in September from its factory in Normal, IL.

Rivian says more retail hubs are planned but, according to documents filed with the U.S. Securities and Exchange Commission, it does not intend to use franchised dealers and is developing a network of service centers around the country to fix the vehicles it expects to sell online.

“Our direct-to-customer model allows us to manage all sales, deliveries, service operations and resale in-house without reliance on a franchise dealership network or other third parties,” Rivian says in its SEC filing. “We employ an integrated, digital-first strategy that is not only convenient and transparent for our customers, but also efficient and scalable to support our continued growth.”

The direct relationships with customers will allow Rivian to gather insights and design solutions, while removing what it describes as structural inefficiencies and increasing customer satisfaction and referrals.

“By controlling every customer touchpoint from awareness through ownership, we replace a patchwork of third parties with Rivian’s end-to-end, integrated solutions,” it notes in the SEC documents.

Rivian says it plans to “secure dealer licenses and engage in activities as a motor vehicle dealer to sell our vehicles directly to customers. In states where we may not obtain a license to sell directly to customers, we may be able to open galleries that are not full Rivian experience spaces.” 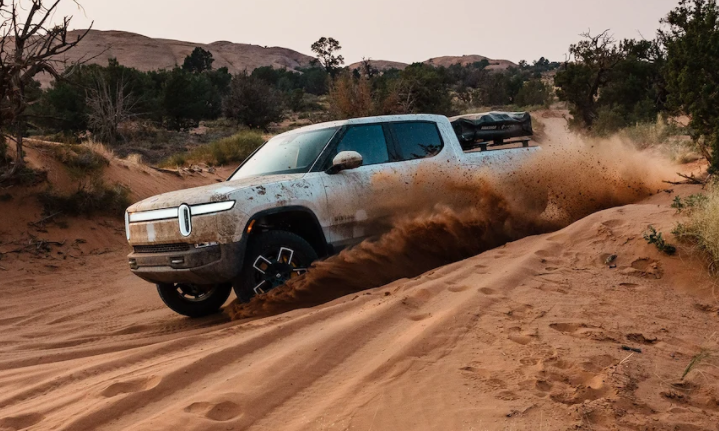 The company-store approach, however, has drawn a lawsuit from franchised dealers in Illinois, and Rivian has told the SEC it does not yet know the outcome of the lawsuit.

The SEC documents were filed in anticipation of an initial public offering of stock that would make Rivian, which has attracted major investments from Amazon and Ford, one of the most valuable automotive companies in the world after Tesla. Rivian’s valuation is expected to top $80 billion, according to analysts following the offering.

The cost, however, has been high. Rivian lost a total of $1 billion in 2019 and 2020 and another $996 million in the first six months of 2021 as it began to ramp up for production of its R1T all-electric truck (pictured above) from its Illinois plant, which has the capacity to build 150,000 vehicles annually and is being expanded.

Semiconductor chips are a vital component of the electrical architecture of Rivian’s consumer and commercial vehicles, but many of the key semiconductor chips used in those vehicles come from limited or single supply sources, the company says.