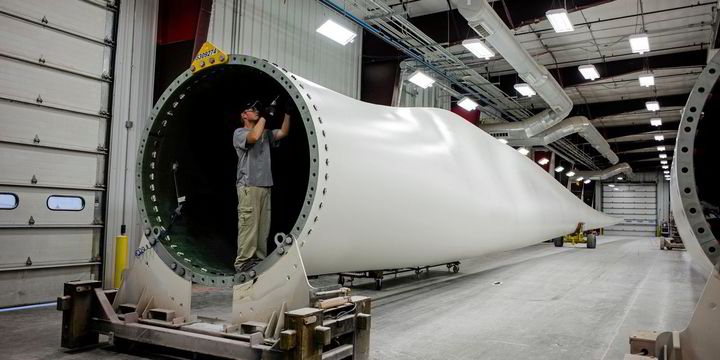 The recyclability of wind turbine blades is increasingly playing a role in offshore wind tenders in Europe and will start to be relevant from a commercial point of view, Siemens Gamesa global sustainability expert Jonas Pagh-Jensen told Recharge.

The Spanish-German OEM in September had launched what it claims to be the world’s first recyclable offshore wind turbine blade ready for commercial use, and said RWE, EDF and Wpd will deploy it in upcoming projects as soon as 2022.

While RWE, for example, at its Kaskasi project in Germany will at first only use recyclable Siemens Gamesa blades at three turbines, demand for them could rise fast due to landfill bans and sharpened tender rules in several countries.

The Netherlands, Austria, Finland and Germany already have landfill bans for wind turbine blades in place, Pagh-Jensen said, and France is introducing requirements for the recyclability of turbines in upcoming offshore wind tenders.

“We see in the coming tenders that you will get awarded points for having a more recyclable turbine,” Pagh-Jensen said in an exclusive interview speaking from WindEurope’s Electric City conference in Copenhagen.

“Eight percent of the points for the next offshore round will be towards recyclability in France.”

The Netherlands – which in recent years have held zero subsidy tenders where criteria other than the price are paramount – will have ecology as an innovation theme in the upcoming auction for the Hollandse Kust West area in the North Sea.

“How do we protect the ecology in the best possible way? There, of course, we also believe recyclable blades have a role to play,” Pagh-Jensen said.

The UK, meanwhile, in its last CfD round has introduced criteria on low carbon footprint and low carbon products.

“You could say also being able to recycle your blade lowers your total carbon footprint.”

Driving the environmental agenda with your products has a benefit, Pagh-Jensen believes, adding that Siemens Gamesa from 2024 onwards expects to be ready to supply full projects with recyclable blades. The OEM’s factories in Aalborg, Denmark, Hull in the UK, or in France would be able to produce the recyclable blades, depending on what projects they are offered for.

Indian specialist Aditya Birla Advanced Materials in close coordination with Siemens Gamesa has developed a novel recyclable epoxy resin system, allowing for the possibility to efficiently separate the resin from other components at the end of the blade’s working life – and thus recycle the blade.

Composite materials used in blades so far had been challenging to recycle, because a resin system binds all the components together.

Siemens Gamesa has earlier said it has the ambition to make all its turbines fully recyclable by 2040.

Rival OEMs Vestas and GE and others in the industry are also pursuing strategies to reuse parts or materials of wind turbine blades.