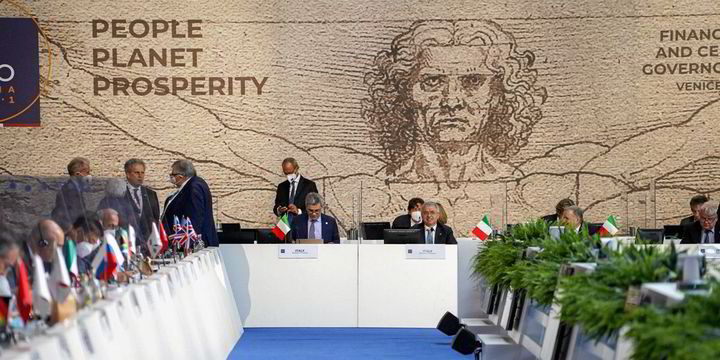 Chief executives and associations from much of the world’s wind energy industry in an open letter have urged the G20 countries to step up their ambition to meet international climate goals by tapping much more into wind power than current plans foresee.

Signatories represented the Global Wind Energy Coalition for COP26, and included the CEOs of companies such as top turbine makers Siemens Gamesa and Vestas, major utilities such as Orsted, RWE or EDPR, and wind power associations across the world from China, Europe, Latin America and Africa.

While some progress has been made in the energy transition, current net zero pledges from G20 countries still put the world on a 2.4°C global warming pathway, well beyond what is needed to avoid the worst impacts of climate change, the letter said.

How climate change is already now affecting the world was shown last week by deluge-like rains in Germany that claimed more than 160 lives, and recent extreme heat of up to 50°C in western parts of Canada and the US.

“G20 countries have huge amounts of untapped wind power potential which can fulfil significant portions of national electricity demand, but they are barely scratching the surface of what they can deploy,” said Rebecca Williams, COP26 director at the Global Wind Energy Council (GWEC).

“With the current pace of wind power installations across the world, forecasts show that we will only install less than half of the wind power capacity needed to get to net zero by 2050.”

The letter cites installation shortfalls of as much as 57% by 2050.

The signatories point to a recently published roadmap by the International Energy Agency (IEA) that shows that annual wind deployment must quadruple from 93GW in 2020 to 390GW in 2030 to meet a net zero by 2050 scenario.

Both the IEA and the International Renewable Energy Agency are aligned in the total wind energy capacity required for a net zero scenario which is compatible with a 1.5°C warming pathway, foreseeing a need for 8,265GW and 8,100GW by 2050, respectively.

To achieve the massive level of deployment, the open letter calls on G20 nations to:

The letter stresses that achieving the scale and speed of installation needed for net zero is unrealistic under present ‘business as usual’ conditions, and cannot be done without decisive and urgent policy change across the G20 countries, which represent more than 80% of global energy-related carbon emissions.

The G20 group includes 19 of the world’s biggest economies and the EU.