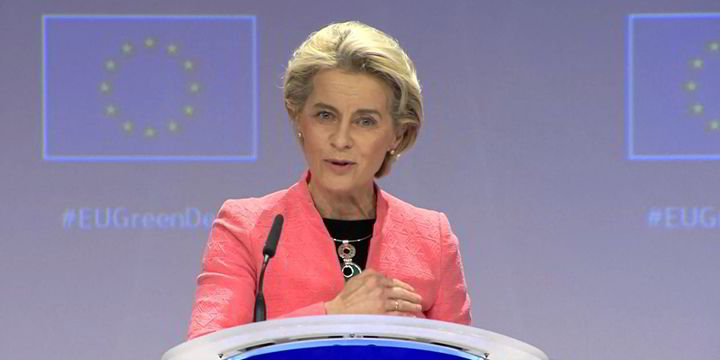 The European Commission (EC) has unveiled its long-awaited Fit for 55 package — a series of proposals that aim to put the policies in place that will enable the EU to reduce its greenhouse gas emissions by at least 55% (compared to 1990 levels) by 2030.

These include a new target of 40% of the bloc’s final energy consumption coming from renewable sources by 2030 (up from the current goal of 32%), with specific renewables targets for transport, heating and cooling, buildings and industry, and increased sustainability criteria for bioenergy.

The commission expects that wind power will provide 34% of electricity generation in 2030, with solar supplying 14%. This would equate to nearly 430GW of wind (including 60GW offshore) and about 380GW of solar, although different scenarios are presented in the revised Renewable Energy Directive with slightly different calculations.

The 469-page document states that renewables investment costs will not lead to a significant increase in electricity prices.

Also included in the package are:

– The introduction of carbon pricing for heating fuels, road transport, and maritime and aviation sectors;

– Mandates for 50% green hydrogen in the transport sector and heavy industry by 2030, including all H2 used as feedstock for chemicals and in final energy consumption;

– Stronger emissions standards for light vehicles, with all new cars and vans being zero-emission by 2035;

– Improved infrastructure for the zero-emission road transport, including about 16.3 million electric vehicle charging points and one hydrogen refuelling station every 150km along the Trans-European Transport Network and in every “urban node” within it.

– A new target for 5% of aviation fuel to be “sustainable” — ie, produced from carbon-neutral biofuel or synthetic fuel derived from clean hydrogen — by 2030, up from less than 0.1% today;

– A 13% reduction in the greenhouse-gas intensity in shipping fuels by 2035;

– An increase in taxes on fossil fuels;

– The introduction of the world’s first carbon border adjustment mechanism to ensure that imports have the same embedded price on carbon as within the EU.

A new Social Climate Fund will also be introduced — paid for by 25% of the expected revenues from emissions trading for building and road transport fuels — to ensure that the poorest in society do not suffer as a result of any increased costs.

“We are today proposing a definition for renewable hydrogen, which makes it possible to have a viable certification system,” said energy commissioner Kadri Simson. “And we will also set specific mandatory targets for the use of renewable hydrogen in the industry and transport sectors to give the right signals to investors. And to give renewable hydrogen a boost.”

All the proposals will still need to be approved by member states.”We’re putting a price on carbon so that people have the incentive to use less carbon,” said Frans Timmermans, the executive vice-president for the European Green Deal. “And we put a premium on decarbonizing so that we stimulate innovation adaptation, we stimulate the bringing to the market of new technologies, et cetera, et cetera, that will take us to where we need to be.”

He admitted that it will be “bloody hard” to hit the 55% emissions target.

“Yes, it is difficult. Yes, it is hard, but it’s also an obligation, because if we would renounce our obligation to help humanity live within planetary boundaries, we would fail not just ourselves, but we would fail our children and our grandchildren, who, in my view, if we don’t fix this, will be fighting wars over water and food,” said Timmermans.

EC president Ursula von der Leyen said: “Europe is now the very first continent that presents a comprehensive architecture to meet our climate ambitions. We have the goal, but now we present the roadmap to how we are going to get there.

“Our package aims to combine the reduction of emissions with measures to preserve nature and to put jobs and social balance at the heart of this transformation. And it also shows the value that this transformation will generate and how public and private investment can and will, of course, work together to make it a reality.”

Timmermans added: “If we get to minus 55 in 2030, and climate neutrality in 2050, humanity has a fighting chance because the rest of the world is watching us, is following us and is really looking towards us for the best examples to get us there.”