Enertime, a company specialising in clean energy harvesting, is deploying an EX-rated high voltage ABB generator for a pilot project to recover energy normally lost in the transmission and supply of natural gas. 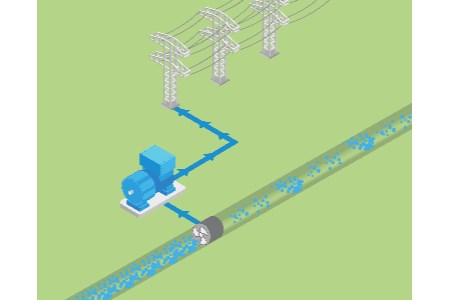 Enertime is working with GRTgaz, the European leader in gas transport, to install a gas expansion turbine in the pipeline at a site in Villiers-le-Bel in the Paris region. Driven by the turbine, the ABB generator will produce 2.5 MW of electricity that will be fed into the local grid.

Natural gas pipelines must be maintained at a high pressure of around 5 to 7 megapascals (MPa) for transportation over long distances. However, the pressure must be reduced to as low as 0.3 MPa to supply customers. Usually, throttle valves are used to reduce the pressure, resulting in a significant loss of kinetic energy of the high-pressure gas. The solution developed by Enertime is to replace the throttle valve with an expansion turbine. This enables the pressure to be reduced while the energy in the gas is used to produce electricity.

“The idea of this demonstration project is to recover energy at the gas expansion stations using a turbine to produce low-carbon electricity,” said Léa Vergé, Enertime’s Engineering Manager.

“We selected ABB as a partner as we have already worked together several times, and the proposed solution was technically and commercially suitable.”

“This project is a perfect example of how advanced generator technology can play a vital role in boosting the energy efficiency of innovative low carbon power generation,” said Heikki Vepsäläinen, ABB Division President, Large Motors and Generators. “It also showcases ABB’s deep know-how and collaborative approach to meet even the most demanding customer requirements.”

The 6.6 kilovolt (kV) generator was completed in November 2020 when it passed the type test. However, the project had an extremely complex certification process. In addition to the standard production process, all the materials used had to be approved by Eurofins, the Finnish certification company.

The Villiers-le-Bel pilot is being carried out as a TENORE project. It was selected for financial support by the French Future Investment Program (PIA), managed by ADEME, the French Environment and Energy Management Agency.

Because the high voltage generator is operating in an explosive atmosphere, Enertime required an EX-type machine. This called for specific design features such as changes in the auxiliary boxes and cable ducts. These were installed with a special hardening compound to prevent movement after installation.

Read the article online at: https://www.worldpipelines.com/contracts-and-tenders/24092021/enertime-to-use-abb-generator-to-boost-energy-efficiency-of-a-natural-gas-transmission-network/