Since 3Q20, global consumption of crude oil and petroleum products has increased faster than production, which has caused lower inventory levels and higher crude oil prices. In the EIA’s November Short-Term Energy Outlook (STEO), it forecasts that rising production from OPEC+ countries and the US will lead to global liquid fuels inventories increasing and crude oil prices falling in 2022. 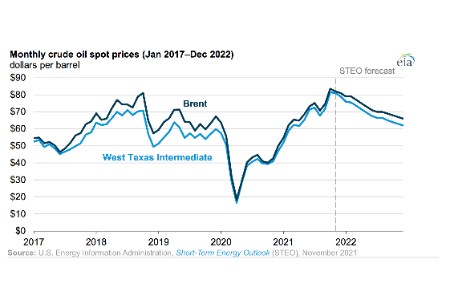 The EIA estimates that world crude oil consumption exceeded crude oil production for five consecutive quarters, starting in the 3Q20. During this period, petroleum inventories in OECD countries (the Organisation for Economic Cooperation and Development) fell by 424 million bbls, or 13%. EIA forecasts global crude oil demand will exceed global supply through the end of the year, contribute to some additional inventory draws, and keep the Brent crude oil price above US$80/bbl through December 2021.

However, it forecasts that global oil inventories will begin building in 2022, driven by rising production from OPEC+ countries and the US and slowing growth in global oil demand. The EIA expects this shift will put downward pressure on the Brent price, which will average US$72/bbl during 2022.

Spot prices of Brent, an international crude oil benchmark, and West Texas Intermediate (WTI), a US crude oil benchmark, have risen since their April 2020 lows and are now above pre-pandemic levels. In October, the price of Brent crude oil averaged US$84/bbl, and the price of WTI averaged US$81/bbl, the highest nominal prices since October 2014. The EIA expects that the price of Brent will fall from an average of US$84/bbl in October 2021 to US$66/bbl in December 2022 and the price of WTI will fall from an average of US$81/bbl in October 2021 to US$62/bbl in December 2022.

The futures markets are similarly showing high prices for near-term contracts compared with longer-dated contracts, a situation known as backwardation. Crude oil inventory levels, among other factors, affect the difference between near-term and longer-term futures prices. Differences in prices between crude oil contracts for delivery in the near term compared with contracts for delivery at later dates indicate market expectations that inventory draws will moderate.

Low crude oil inventories in the US – particularly in the transportation and storage hub of Cushing, Oklahoma, where NYMEX WTI futures contracts are physically settled – have likely contributed to additional backwardation in WTI compared with Brent. According to the EIA’s Weekly Petroleum Status Report, crude oil inventories in Cushing were 26.6 million bbls on 12 November, which was 49% below the previous five year average and 32% of the working storage capacity.

Read the article online at: https://www.worldpipelines.com/business-news/19112021/eia-forecasts-crude-oil-prices-will-decline-during-2022/