Brimmond Group, the Aberdeenshire-based provider of hydraulic, pneumatic, electrical and mechanical equipment and services, has announced four contract wins totalling £1.75 million, consolidating a period of growth for the engineering company which celebrates its 25th anniversary this year. 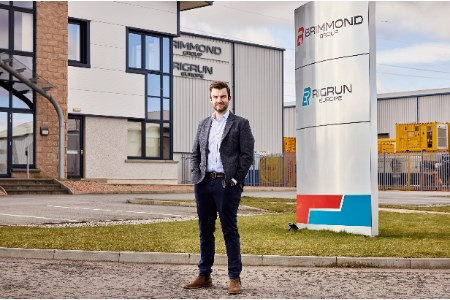 The contracts span the renewables, subsea and production sectors and were all secured in Q3 and Q4.

Engineering Director for Brimmond Group, Tom Murdoch, explains: “2021 has proved an exceptional year for our rental fleet, however, until recently design and manufacture contract wins had waned slightly as our industry continued to weather the effects of the pandemic. This trend has changed dramatically over the last few months, in which we’ve secured four separate contracts all due for completion around the end of Q1 next year.”

The most significant of the contracts is a seven-figure order to design and manufacture equipment which will support the conversion of a jack-up rig into a production platform for a UK-based client, to be shipped out to the Middle East.

Tom continues: “We’re delivering seven identical Hydraulic Power Units which will provide the passive heave compensation function within the Conductor Tensioning System. Each unit comprises six 50 l Accumulators, a pneumatic primary pump and an electrically driven back up pump. The units will be certified for use within an ATEX Zone 2 Hazardous Area and will be certified to PED Category IV”.

Another six-figure contract will see Brimmond design and manufacture a Mechanical Lined Pipe Hydraulic Pressurisation Unit (MLP HPU), to be permanently installed on a pipe-lay vessel. Tom said: “Custom designing equipment for different regions and applications is a key service offering. We successfully designed this unit for a client back in 2017; the second order comes as a direct result of the success of the first project.

“The MLPHPU is designed to establish and maintain a constant pressure in pipelines up to 406 mm in diameter and eight km in length during reeling and laying operations. At the heart of the second-generation unit are two KAMAT High pressure triplex plunger pumps, providing a smoother operation and greater service intervals than the pumps used within the first generation unit, lowering our clients’ OPEX”.

A contract win within the renewables sector will see Brimmond Group oversee the fabrication, manufacture and testing of a subsea anchoring ROV, used to install anchors to which a tidal platform will be attached, this time in Canadian seas. “While decommissioning projects in the North Sea remain pivotal to our operations, we’re delighted to be diversifying our offering and making strides in both new regions and sectors, such as renewables and aquaculture,” Tom concluded.

The engineering company has also been expanding its staff with the addition of two technicians and two apprentices to the workshop, along with three new positions in the office including a Hire and Certification Administrator and a Design Engineer.

Brimmond Group will be exhibiting at Offshore Europe and Subsea Expo early next year.

Read the article online at: https://www.worldpipelines.com/contracts-and-tenders/08122021/brimmond-group-announces-175-million-worth-of-contract-wins/