A solution to the IMO 2020 MARPOL Annex VI requirement

On January 1, 2020, a new requirement limiting the sulfur content of marine fuel to a maximum of 0.5 wt% went into effect.

On January 1, 2020, a new requirement limiting the sulfur content of marine fuel to a maximum of 0.5 wt% went into effect. The International Maritime Organization’s (IMO’s) 2020 MARPOL Annex VI rule globally prohibits ships from operating while using a fuel with more than 0.5 wt% sulfur without an exhaust gas scrubber.

From the perspective of marine engine design firms and shipowners, the most desirable way to comply with the new regulation would be to use a heavy residual fuel oil that meets the ISO 8217 fuel specification and has a sulfur content of less than 0.5 wt% sulfur. An early recognition for such a fuel oil led to the development of a proprietary upgrading processa several years before the IMO 2020 rule took effect. Since the patented very-low-sulfur fuel oilb (VLSFOb), which was made using this proprietary process, maintains ISO 8217 bulk properties, it reduces the risk of engine performance problems related to fuel oil blending.

Due to the COVID-19 pandemic, the decline in demand of transportation fuel resulted in an excess of distillate materials—and in the refinery streams used to produce those same distillate materials. The excess of distillate and intermediate refinery products drove the industry toward blending distillate fuel oils or blending distillate materials with residual materials to adhere to the IMO marine fuels regulation. A wide range of problems related to such VLSFO blends available in the market are being reported in literature.1,2,3 From sludge formation, engine damage, safety concerns and pollution to increased soot and dumping of sludge, the new VLSFO formulations are creating significant safety and performance concerns for the shipping industry. Distillate blends may cause wear and tear to ships’ engine systems, as their bulk properties can be adversely affected when distillates are mixed with residual materials. Because the proprietary VLSFO is created solely through hydroprocessing, the resultant product is compliant and homogenous.

While installation of scrubbers on ships is an alternative to using VLSFO, scrubbers present significant issues, including complex operation, costly maintenance, emissions violations, bans on open-loop scrubbers in some ports, and disposal issues for toxic byproducts and sludge.4,5,6,7,8,9

Refining processes have historically focused on breaking down and upgrading residual material to create higher-value distillate products. Counter to traditional residue upgrading technologies, the proprietary upgrading process intentionally maintains the bulk properties of residual fuel that make it the preferred fuel of the shipping industry. The patented technology is rooted in commercially proven refining processes, utilizing an alternate approach counter to traditional refinery residual material upgrading processes such as hydrocracking, deasphalting and coking. Because the proprietary upgrading process does not focus on cracking, hydrogen consumption is significantly lower than hydrocracking, and no low-value residual products remain to be processed further or sold into the high-sulfur fuel oil (HSFO) market.

The proprietary upgrading process was designed with a focus on three primary principles. These include:

In addition to the benefits outlined, a modular proprietary upgrading process unit allows much faster entry into the market, with the lowest need for integration and disruption to existing infrastructure at either a refinery or marine terminal. A modular version of the proprietary upgrading process can be fully operational at a greenfield site in less than 2 yr from the date of placing an order—or even sooner, if located inside an existing refinery, which is half of the schedule for a comparable ebullated-bed hydrocracker or coker. Beyond price and speed-to-market considerations, both coking and hydrocracking produce some amount of low-value residual material that must be sold into the market at a value lower than the feedstock and generally lower than HSFO. Compared to available information on competitive technologies, the proprietary upgrading process is the fastest to market—as either a fully modular or stick-built unit—because it has a lower capital expenditure and operational expenditure and is rooted in process technologies broadly understood and accepted by refiners. 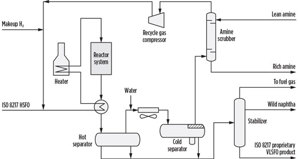 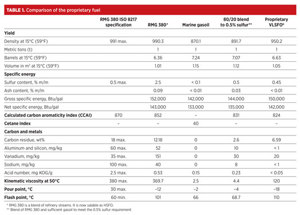 The author’s position is that blending HSFO with distillates is not a commercially acceptable and sustainable solution to the IMO 2020 regulatory requirements. In the short term, blending a VLSFO requires the use of higher-value (and thereby higher-cost) ultra-low-sulfur distillates that are only more readily available during 2020–2021 due to decreased demand for transportation fuels because of the global pandemic. However, the asphaltenes present in residual streams are often not compatible with paraffinic distillates, which may cause serious problems.

Commercial experience, and several prior and recent industry surveys, show that blending to produce a low-sulfur fuel oil can result in a fuel that is incompatible with ship engines.10 In addition, blends “loaded on top” of residual fuels, distillate fuels or other blends in storage tanks or on ships can cause precipitation of asphaltenes due to incompatibility of these blends with other fuels. With these unstable blends, precipitated asphaltenes form sludge in tanks that can plug filters, purifiers, fuel injection equipment and even fuel lines. Precipitated asphaltenes cannot be brought back into solution, meaning that this sludge formed by a blended VLSFO will also need to be cleaned from tanks and fuel systems before being safely disposed of on land.

The author’s company has carried out compatibility and miscibility tests to demonstrate that the proprietary fuel does not create or experience these issues. The proprietary VLSFO was tested with RMG, RMK and distillate grades of marine fuels, and has proven to be miscible with residual fuels, as well as MGO and ultra-low-sulfur diesel (ULSD) in mixtures of 50/50, 30/70, 20/80, 10/90 and 5/95. Compatibility test samples and results are shown in FIGS. 2 and 3.

Shelf life refers to the length of time that fuel oil remains stable and in solution in storage. The reserve stability number (RSN)—as measured by ASTM D7061—is an industry-accepted measurement of the stability of marine fuels. Fuels with an RSN of less than 5 are considered to pass and have a high stability reserve. Asphaltenes are not likely to flocculate, and the fuel is stable with a commercially reasonable shelf life. Fuels with an RSN of 5–10 have a much lower stability reserve, with limited shelf life and may flocculate. Fuels with an RSN greater than 15 are considered unstable. Testing has shown that, after more than a year in storage, the proprietary VLSFO had an RSN of 1.2—thereby demonstrating that the proprietary fuel is stable and has no issues around shelf life. Blends and other VLSFO/ULSFO products on the market are reported to have shelf-life problems and may be stable for just a matter of days or weeks in storage. This can create major issues with sludge formation over time in storage tanks on land and onboard ships. Costly and time-consuming cleaning of tanks and maintenance of ship fuel systems are required when unstable fuels have been bunkered.

Ignition delay is the time that elapses from the start of fuel injection to the point of combustion. A long ignition delay results in an accumulation of unburned fuel in the combustion chamber, which can cause knocking, poor engine performance and, eventually, engine damage. The proprietary fuel demonstrated superior ignition properties when tested using the combustion pressure trace test.

FIG. 4 illustrates the proprietary fuel’s combustion and ignition properties vs. “normal” fuel (ECN=29) and a “problem” fuel (ECN=8), as taken from the International Council on Combustion Engines’ (CIMAC’s) 2011 “Fuel Quality Guide–Ignition and Combustion.”

Lubricity is commonly defined as the ability of a fluid to minimize friction between surfaces in relative motion under load conditions. A fuel oil with poor lubricity can rapidly cause severe wear to liners and piston rings, create turbocharger issues and ultimately result in engine failure. The ISO 12156 test method is commonly used to determine the lubricity of marine fuels. When tested in accordance with ISO 12156, the proprietary fuel resulted in lubricity of less than 100 µm, showing its superior lubricity properties vs. distillate-based fuels. For purposes of comparison, the lubricity specification for distillate fuels is less than 520 µm, meaning that anything less than 520 µm meets the requirement for lubricity.

Another issue related to lubricity recently identified and associated with low-sulfur fuel oil blends is FCC catalyst fines, which are present in small quantities. The catalyst fines, which are present in HSFO base material, become abrasive when blended with low-viscosity, ultra-low-sulfur distillates and can cause significant cylinder wear in ships’ engines. Because the proprietary VLSFO exceeds the lubricity specification and does not contain abrasive catalyst fines, these are not a concern for ships using the proprietary fuel.

The proprietary fuel meets the ISO 8217 specification for the residual marine fuel oil preferred by the shipping industry and is a robust solution to the environmental regulations specified in IMO 2020 MARPOL Annex VI, thus producing significantly lower sulfur oxide and nitrogen oxide emissions than HSFO. The proprietary upgrading process is rooted in commercially proven hydroprocessing technology—removing sulfur, metals and other contaminants from ISO 8217 high-sulfur residual marine fuel oil. With its lower hydrogen consumption and energy demand, the proprietary process has a smaller greenhouse gas impact than other residue upgrading options. HP

a The Rigby Process®
b Rigby Fuel (VLSFO)

Bert Klussmann is Chief Technologist at Rigby Refining. He has more than 20 yr of process design and technology development experience. Mr. Klussmann has designed, built, started up, operated and managed proprietary hydrodesulfurization technologies, as well as other refining process solutions. He has also managed the process engineering department for a major technology licensor. Mr. Klussmann earned a BS degree in chemical engineering from Texas A&M University.