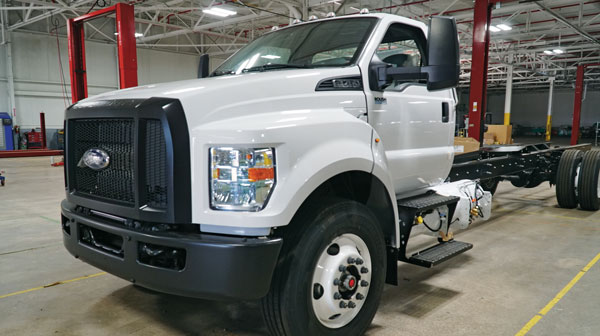 A propane-fueled Ford F-750 can be used in food and beverage delivery, government and paratransit fleets, and in propane marketer operations as a bobtail, cylinder delivery or tank-setting truck. (Photo courtesy of Roush CleanTech)

The benefits of propane autogas are seemingly limitless. And, as further proof of the short- and long-term advantages of the alternative fuel, fleets are sharing their firsthand experiences of operating their vehicles on autogas.

Ranging in size and scope, five fleets in particular – utilized for commercial usage, by a municipality, paratransit provider, propane marketer and school bus transportation service – are exhibiting what professionals in the industry already believe: Autogas works for any type of fleet.

Throughout the last six months, the National Star Route Mail Contractors Association (NSRMCA), which is composed of transportation companies that contract with the U.S. Postal Service (USPS), has witnessed a commitment to propane autogas by a wide array of its members from all regions of the U.S.

As an example, South Carolina’s McAbee Trucking has been at the forefront of propane autogas adoption, while contractors in Colorado, New Hampshire, North Carolina, Pennsylvania and Virginia have also committed to propane autogas. And a variety of other contractors, including some in California and Maryland, are also preparing to commit.

“At my last count – and this is only looking at a fraction of the entire USPS contracting industry – that equates to commitments for approximately 79 new propane autogas trucks that will be hitting the road in the near future,” says Gregory Reed, the group’s executive director. “That is just within the last six months.”

Association members’ recent, rapid interest in propane autogas is tied to three significant driving forces. First, due to the costs of propane refueling infrastructure, vehicle maintenance and fuel, propane autogas is highly competitive and more affordable when compared to diesel and other alternative fuel solutions. 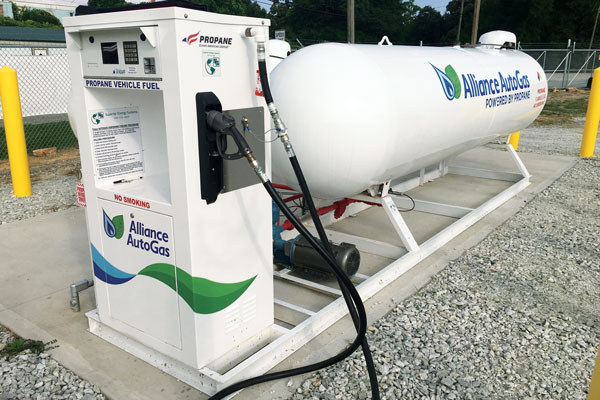 Propane-fueled fleets have the luxury of installing their own refueling infrastructure for added convenience and efficiency. (Photo courtesy of Propane Education & Research Council)

Additionally, the carbon intensity of propane autogas is lower than that of diesel and substantially lower than electric and other alternative fuel solutions. And its carbon intensity score continues to decline, particularly as renewable propane becomes increasingly available. As a result, it’s helping USPS achieve its sustainability goals.

“Whatever technological developments lay ahead that will provide an even better alternative fuel solution – and I would argue that these developments are still many years away – propane autogas delivers immediate environmental benefits without having to sacrifice functionality or affordability,” Reed states.

Using roughly 700 to 1,200 gallons of propane autogas per truck, per month (and traveling an average of 8,000 miles during that time), the association’s membership is also able to enjoy another benefit of autogas: access to an ever-expanding refueling network. They can also secure their own propane autogas refueling stations on their properties at almost no additional cost, thereby providing peace of mind during unpredictable situations like natural disasters.

“The bottom line? As more and more contractors demonstrate that propane autogas makes good business and environmental sense, there’s no reason why it won’t become the new standard for USPS contractors,” Reed adds. 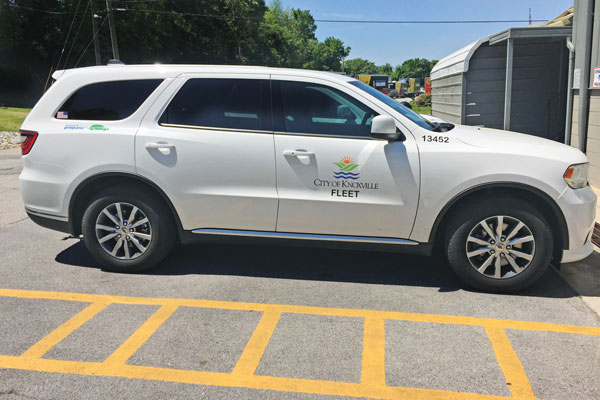 During the fall of 2020, the city of Knoxville, Tennessee, partnered with Alliance AutoGas in order to begin using autogas vehicles as an alternative to traditional fuels. Striving to have a greener footprint, the city has since added five autogas vehicles to its fleet – all Dodge Durangos – and is planning to add more in the near future.

Running on Prins Autogas’s systems, the vehicles refuel at a site outside the city, though the city is constructing on-site refueling infrastructure. And, due to its increasingly extensive usage of propane autogas – the vehicles burn 750 gallons per month on average – the city is also planning to establish a second autogas refueling site during the spring of 2022.

Aside from its five Dodge Durangos, the city has 21 zero-turn, propane-fueled mowers that are utilized daily, typically from March to November, for public grounds maintenance. The mowers have been in full rotation since 2014, ultimately leading the city to recognition by the East Tennessee Clean Fuels Coalition two years later as a 2-Star Tennessee Green Fleet.

The city has also been rated as one of the 100 Best Fleets in America by the National Association of Fleet Administrators for the last two years.

“Since beginning our autogas program, the city of Knoxville has seen the benefits of utilizing the alternative fuel firsthand,” says Nicholas Bradshaw, fleet services director. “We look for fleet solutions that are better for our environment and make us more sustainable – and utilizing autogas does both.”

He continues, “We look forward to adding more autogas vehicles to our fleet and having the convenience of our on-site refueling infrastructure.”

Operating in a 471-square-mile county, Broward County Transit provides customers over 900,000 trips annually, leading to 11.5 million miles of travel overall. The county’s transit, which is based in south Florida, knew it needed an affordable and environmentally sustainable alternative fueling option, so it implemented a wide assortment of propane paratransit fleet vehicles – 272 so far.

In fact, roughly 75 percent of the transit’s fleet utilizes propane autogas, a figure Paul Strobis, director, paratransit division of the Broward County Transportation Department, believes will continue to rise. The county is in the process of permitting two more fueling stations, in addition to one that’s already being used at its operations facility, along with five others.

The vehicles – a Ford E-450 cutaway (with a Roush CleanTech autogas fueling system), a Ford Transit cutaway (with an Icom North America bi-fuel system) and a Ford Taurus (with another Icom bi-fuel system) – have reduced carbon dioxide emissions by about 12,000 metric tons and saved $8 million over five years, according to a Propane Education & Research Council case study about the fleet. 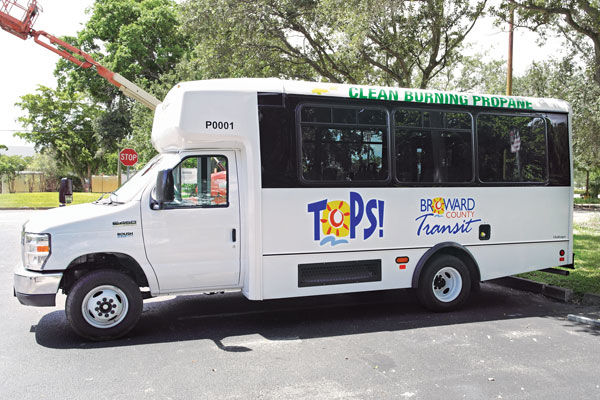 “Paratransit services are the most expensive per-passenger service provided by a transit agency, so we’re always looking at growth-mitigation steps we can take,” Strobis says. “Propane autogas’s lower costs have benefited the level of service we’ve been able to provide to our senior and disabled populations.”

Propane autogas has also enabled Broward County Transit’s vehicles to travel more than 300 miles before they require refueling. Consequently, prior to COVID-19 and as recently as 2019, the county’s propane autogas vehicles consumed more than 1.5 million gallons of propane annually.

“The environmental impact of utilizing propane autogas can’t be overlooked either, as Broward County is known for its beautiful beaches, which we want to protect,” Strobis says. “By having cleaner energy vehicles that use domestically produced propane, we’re able to protect our county’s environment long term.”

For years, ThompsonGas has had autogas vehicles within its own fleet.

Propane marketers that want to develop the propane autogas market must use the fuel in their own vehicles, ThompsonGas says. (Photo by Monte McLeod)

However, due to recent increases in fuel prices, along with new autogas conversion systems and OEM equipment technology that’s now available, the propane marketer has increased its efforts to purchase or convert as many propane autogas vehicles as possible.

To do so, it added a director of autogas to its team last year, thereby enabling it to focus on increasing its autogas customer base while also developing its infrastructure, conversion and service availability. Furthermore, this year it created a new division, Thompson AutoGas, for marketing, education and sales direction purposes.

Monte McLeod, the company’s director of autogas, believes the pace of propane autogas implementation will continue to increase throughout the U.S.

“If we want to further develop autogas as an accepted alternative fuel, we need to use it ourselves,” McLeod says. “We’re noticing the same benefits our customers are so far: saving money on our fuel costs and meeting our internal sustainability goals.”

As a result of the performance seen with propane autogas vehicles, many ThompsonGas sales and service employees have asked about converting their vehicles to autogas, leading to what McLeod considers a “fast culture change.”

Presently, ThompsonGas runs 50 bobtails, along with 75 sales and service vehicles, on propane autogas. It also has ordered 10 F-750s, which feature new 7.3-liter engines. The bobtails are from Freightliner and Roush CleanTech, while the service vehicles are Chevy and Ford pickups, and the sales fleet is composed of pickup trucks and Ford Explorers.

“We’re also interested in all types of autogas technology,” McLeod says. “Since the development is constantly changing, we’ve enjoyed using the right systems in the right application. For example, a bobtail can run on a Roush CleanTech system, while a transit van can use a bi-fuel system – and each vehicle has its own unique needs.”

The vehicles, which burned 75,000 gallons last year, can be refueled on-site at ThompsonGas’s properties or off-site, offering employees a mix.

“Our employees are more excited about autogas than ever before,” McLeod says. “As an industry, it’s our responsibility to promote autogas as a fuel. To do so, we need to continue to educate and train – as we’ve been doing internally by focusing on propane principles, infrastructure, safety and vehicle operation – to stay relevant and promote growth.”

“Since implementing autogas vehicles, we have noticed significant cost savings, regarding service,” says Ron Halley, vice president of fleet and facilities at STA. “This has primarily been due to the fact that less oil is needed for an oil change and no fuel filters are required.”

“Our customers like propane buses because there is no diesel smell or noise at the schools, and parents like them because of the lower noise levels in their neighborhoods,” Halley says.

“And, by using propane autogas, STA is also able to operate the greenest fleet possible, as it continues to reduce its carbon footprint.”